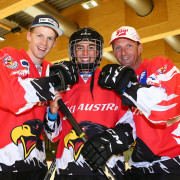 During last month, the primary point on my to do list was to relax and not to think about ski jumping! 😉

In my free time I didn’t go on vacation but stayed at home and spent my time with friends, girlfriend and family to “make good for” everything I hadn’t have time during the stressful World Cup Season. Due to the fact that I really love to be on the mountains I used the time for some skiing days respectively ski tours.

Like last year I also took part with the OMV in this year’s Vienna City Marathon. Always a great event with those countless fans which cheer for you besides the whole route. Additionally that was also kind of a “kick off” of the preparation for next season. 😉

I’m already in my training with Michi and the other ski jumpers at our support point in Rif since two weeks now. But at the moment ski jumping is still far away and so we have cycling, running, soccer and many other sports on out trainings program.

Some really fun but nevertheless exhausting days. Nothing comes from nothing! 😉

And again another season is over! It’s unbelievable how fast last months went by but I guess with this tight schedule, time seems to fly by. Although it was a great season again, I’m glad to have now some time for family and friends – that’s something I really miss during the world cup season.

Although season 2015/2016 didn’t always go according to plan I’m nevertheless quite satisfied with my performance during the last months. One big goal was to win a medal at the Ski Flying World Championships and in the end I took two with me home!! That was really great, especially in front of the countless Austrian fans at the hill – a unique feeling!! Besides the fifth place at the 4 Hills Tournament, my fourth world cup victory, and setting a new Austrian record with 246,5m (taking back the room record from Michi ;-)), I ended on a good 6th place in the overall world cup. So at the bottom line a really good season although I want to jump more constant again next year. This is something I will be working on during summer.

Last but not least, congratulation to Peter Prevc on an unbelievable season. Peter you deserve it!

In only three weeks we’ll already start in the new season – at least concerning our preparations, because it will be our first team trainings course of the next season. But till then I will enjoy my free time and collect some piste kilometers!

So enjoy the last days of winter in the mountains! 😉
Krafti