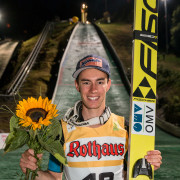 Well, a big part of this year’s Summer Grand Prix is already over and although those weeks were exhausting, it also was a cool time, especially because I’m really satisfied with my results during the first four stops. Every time Top-10 and two times on the podium, that’s something you can build on.

Of course you shouldn’t overrate the summer competitions but it gives you some certainty and just a good feeling when you know early that you’re on the right track.

Before it will go on for me with the preparations for the upcoming season and also with this year’s Sommer Grand Prix, I head off on vacation to spend some sunny days.