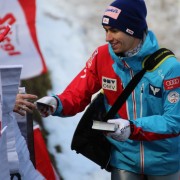 And once more another season is in the books. It was a very exciting but without any doubt an eventful season for me and the whole team.

A season that was again one with a lot of highlights for all of us. For sure the season was quite all about the Olympics and there were already a lot of thoughts on it during the preparation in summer.

But the season wasn’t only about the Olympics. With the ski flying world championships and the all year highlight, 4 hills tournament, this season had a lot to bring up for the whole team.

My season started well. I would almost say the season began as the last one ended. But unfortunately, and that is also human, I had a tough time in the mid of the season and had to fight hard. That this fight found his peak during the 4 hills was hard but that is also part of the game. At the ski-flying world championships I was in better shape with better feeling and in the end it was a very good 4th place. Summing up the season it felt like one of 100 4th places this season ;).

My first Olympic Games were also not that easy for me. I felt a lot better than it was shown on the result list. It was amazing to be part of the Olympic team and wear Austrian colours and show them to the world.

With the raw air and the season finale in Planica I had a really good feeling and flying was kind of „easy-going“. That was really fun and for my opinion the season could have lasted a lot longer. At the end of the season I look back to a lot of great moments, several places on the podium and several top rankings.

The next days I will take a bit of free time, go on holidays, be around in nature at home, do some mountain biking and enjoy spring with is great weather before we start training in about a month.

I wish you a great time in the meantime, a beautiful spring and thanks a lot for keeping your fingers crossed all over the season.

At the bottom line I can say that this year’s Raw Air tour was a pretty cool thing. My performance got better and better throughout the tour and I felt better with every jump I made. I was really happy about that and I’m glad that I could build up such a positive feeling once again. There were a lot of great moments during this tour that I really enjoyed. I would say the most beautiful moment was standing on the podium together with my roommate Michi at the competition in Oslo. Of course the podium in the team competition was also great. It is an awesome feeling to share the podium with the whole team.

I was fighting untill the end of the tour to achieve my goal to stand on the overall podium. Unfortunately I missed it by a narrow margin. Even in Vikersund on the last day the jumps were good but just good and no “Rockets”…

I can draw a lesson from the Raw Air tour and now I am really looking forward to the season final in Planica. Planica for me is always something special. It is the season’s final competition, the weather is always great, it is my favourite hill and the fans make this competition really special. My family and some friends will also be there to cheer for me once again and we will see what happens.

I definitely feel ready and fit for this “grande Finale” and the anticipation is enormous.

Thanks for always keeping your fingers crossed through the whole season and also for the coming weekend, 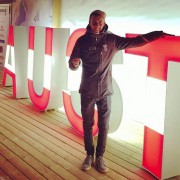 And then it is already March and we have the last ski jumping competitions ahead of us. Unbelievable how fast such a world cup season goes by.

Unfortunately the Olympics weren’t what I hoped for but I have certainly learned a lot. That I have to stay patient and continue to work patiently – it doesn’t always go the easy way. Of course, I had imagined my first Olympic Games differently and naturally I wanted to make a nice finish with a cool jump, but at that moment, it just wasn’t possible. I wasn’t good enough to reach the very top. I will continue to try again and again, but above all I will take with me a lot from this situation and learn a lot for the future and for my next Olympic Games I have collected lots of valuable experiences. Nevertheless I’ve had many “goose bumps moments” at these Olympic Games, though because of other athletes, and I will take these emotions and the flair with me. The ski jumping medals most certainly went to the best athletes, in the single competitions as well as in the team competition.

In Lahti last weekend it already went very well for me. I’m really happy with my third place, because it shows that I can compete with the best ski jumpers. With the RAW Air Tournament a very hard program awaits us but I feel more than ready for it!

In the remaining season I will fight and try to reach the top again – this is the big goal. If I can accomplish that once more, it would be a good step into the right direction and despite everything I could be more pleased with myself.

So keep your fingers crossed for the remaining competitions.