Only a few days are left. With the World Championship in Seefeld, Austria, an absolute highlight comes closer.

To jump in front of your fans, to show your emotions, to fight for medals for Austria – and all that at World Championships  – I think that’s one of the greatest things a sportsman can experience.

Nearly on the day four months ago, at the Austrian championships, I felt completely different. I had the feeling, that I was further away from winning a medal than the sun is away from the moon. 😉

A few challenges got together, which made my life difficult during the summer preparation. In my thigh I had a muscle hardening since last winter that became worse and worse. When warming up, I didn’t even know how to stretch properly. Over time something like that just stays in your mind. Moreover the material didn’t really fit into my system, ski jumping became even more sensitive and I couldn’t really “feel myself”. All these problems and challenges created a really difficult path and so the preparations last summer were probably the toughest time in my career.

At that time, the Word championships in Tyrol were still in the future, but nevertheless the big goal of the season for me. So I really felt hopeless.

Exactly at that time, Patrick took me aside and together we took everything apart and put all of it together in new order. He has been by my side for many years now and is my constant, my most trusted companion.

For my thigh I visited an expert, who actually helped me to solve the problem. I was able to handle my complaints more and more. I also found a solution with the and defined a clear focus…

In autumn, Patrick and I had to define new goals – instead of fighting for victories and podiums, the goal was to find the missing “easiness” and consistency during this season. So a continuous progress until the World Championships. 😉

If anyone had told me then, that four months later I would have already celebrated victories and podiums and am now going into the World Championships as a joint favourite, I would have never believed it… And sure it’s better to go there as one of the favourites, than being totally out of the picture.

I am now looking forward to fantastic Word Championships, where hopefully lots and lots of fans will be cheering for us. I know that we have a good plan for the Championships, I am feeling good and I would like to fight for medals. BUT I have to keep calm and focus on the ongoing jumping – health issues can always upset your plans and the well-known “easiness” can be gone within seconds.

As I said, the season is supposed to be a continuous positive progress – this has worked so far and that’s how I want to keep going.

See you at the World Championships in Seefeld! 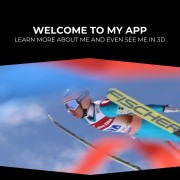 there is now a new cool app of me, with which you get the chance to get to know me even closer!

Together with the app and my autograph card you can discover me as a 3D model!

That’s how it works: Download the app, get my autograph card and get going 😉 Then you simply pull up the app, point your mobilde device towards the printed autograph card and the app will show you me as a 3D model. On one page you can discover me in a sporty outfit, on the other page you’ll see me in action – “flying” over the autograph card. The digital doubles are in such high-resolution that you can zoom in to just a few centimeters. There is also more information about me, including a short bio and my successes.