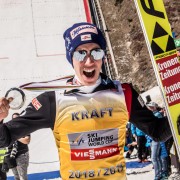 Of course, the preparation as well as the competition season itself had the focus on the Nordic Ski World Championship in Seefeld and therefore on THE highlight of this year.

My start in the season was somehow equal to my difficult preparation. My consistency has been a barely seen guest and the first jumps were not that easy for me. After many ups and downs the first highlight of the season showed up – 4 hills tournament. This should be a great tournament for me and the typical “prickling” in Oberstdorf caught me from the beginning. With my 3rd place in Oberstdorf, a (sadly already known) failure in Garmisch, 2nd place in Innsbruck and 3rd place at the end, I am looking back at a great tournament, in which I gained my usual strength and consistency.

The following jumps in Val di Femme, Zakopane and Sapporo gained great results with three victories, a 2nd and a 4th place and I felt great. At ski flying in Oberstdorf I was consistent, nevertheless not in the very front. For the upcoming world championship in Seefeld I did not see myself as one of the favorites, because I had problems with my consistency and my preparation for the season. At the end I could celebrate the victory of three medals of the World Championship in Seefeld. (Blog World Championship Seefeld)

The Raw Air Tour in Norway was a real spectacle. I was in a really good condition, had great jumps, but had to admit defeat because of the man of the season Ryoyu Kobayashi and therefore won the 2nd place.

In the final of the season in Planica I was not able to show my best performance and I simply was “tired” because of this energy-sapping season.

I want to thank everyone, who contributed to this great season. For me vacation starts, where I can charge my battery again and therefore start preparation with a lot of energy. I keep you up and again thank you for the great support.