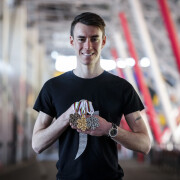 Up and down and up and down… that’s about how this season felt for me 😉 No joking aside, it was the expected challenging and difficult season for me. Right at the beginning Corona interfered a lot, then my back started to call at regular intervals and so one or the other thing came up that made it almost impossible to “get into the rhythm”. The preparation was also not ideal with very few jumps and so the omens for the season were simply uncertain.

And so I was on the move from week to week like a kind of “surprise packet” in the World Cup circus. From 32nd place at the start of the season in Wisla, my personal cancellation of the Ski Flying World Championships in Planica to the World Championship title and three medals in Oberstdorf, everything was there. I listened a lot to my body and focused on this balance between competition and regeneration.

In the end, I can look back on a really cool season with three medals and the one or the other cool result and jump and all in all I can be really satisfied. Apart from my individual omens and challenges, it was a special season for the entire ski jumping family and it’s no secret that we really missed the fans. That is also one of my biggest wishes for ski jumping that we can compete again next year in front of full crowds, raving fans and red-white-red flags.

Until then I wish you a good start into spring and summer, thank you for your support at home in front of the screens during the whole season,
stay healthy and we will read/hear us again,