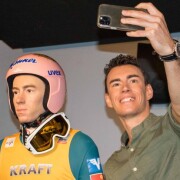 After a long wait, the time had finally come on October 4th. I was allowed to unveil my own wax figure at Madame Tussauds in Vienna as the first ski jumper worldwide! That was a really cool feeling and makes me very proud, especially because I know that in the last few years an extremely large number of visitors at Madame Tussauds have asked for a figure of me. And it’s just an insane honor to suddenly stand next to so many famous personalities. The day of the unveiling was special, particularly when I was allowed to take the first look at my “doppelganger” – they already hit it quite well with my very concentrated gaze on the beam.

I was especially happy that my longtime coach and companion Patrick gave such a wonderful laudation and told many of our shared moments – highs as well as lows – of the last years.

Not only the unveiling was a great experience, but it was also really interesting to witness the whole process in the background. Back in December 2019, we started measuring, which took three hours. Hundreds of photos and measurements were taken of me so that the wax figure would be as realistic as possible. The most difficult thing for me was to keep my concentrated look, because actually I like to laugh a lot. 😉 Also my eyes and hair were picked very precisely – the lady had countless different brown glass eyes and brown “tufts of hair” with her to really pick out the right ones! I also provided my jumping equipment consisting of a suit, helmet, gloves, yellow jersey and skis. It’s almost hard to believe how good and, above all, realistic my wax figure turned out. And the Bergisel backdrop also looks really cool. Nevertheless, it was almost a bit weird when I sat down next to my “twin” on the beam for the first time.

The wait until the unveiling was definitely worth it and it was certainly not the last time I visited my “double” at Madame Tussauds in Vienna!

Now, of course, the focus is already on the coming winter, there are only a few weeks left… Next weekend, the Austrian Championships in Stams and at the Bergisel are on the program, I’m already looking forward to it!

See you soon at the hill